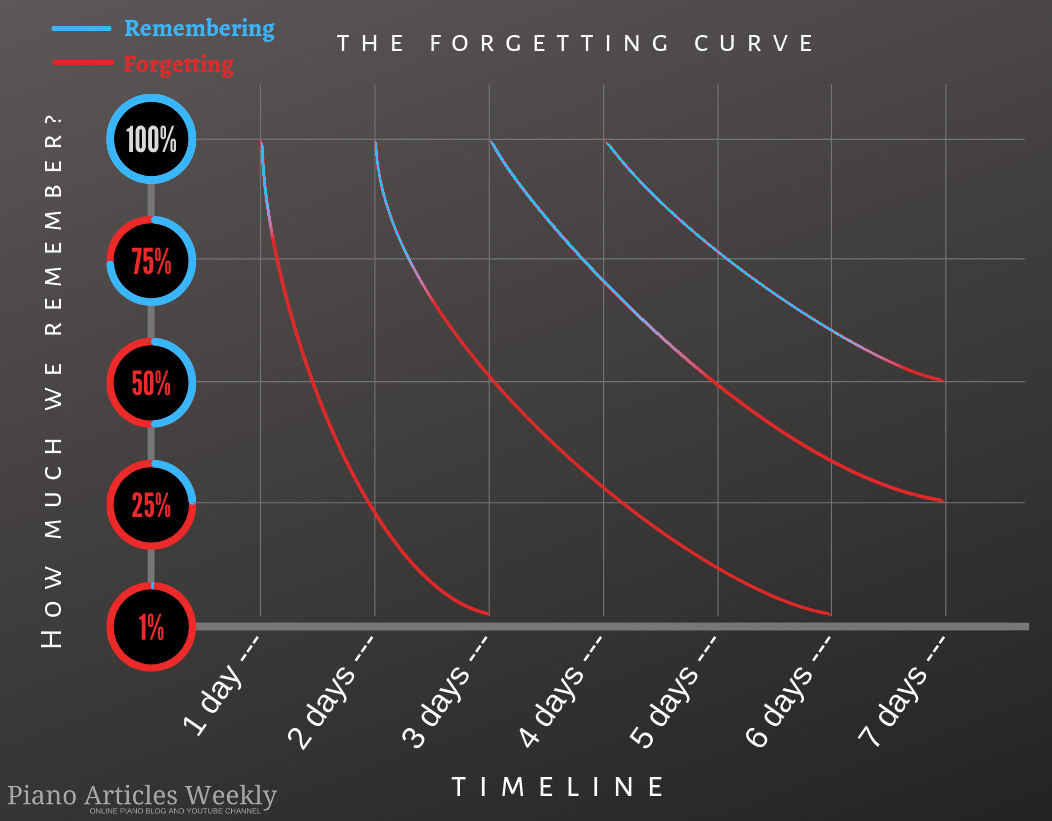 This article focuses on applying short-term and long-term memory types and the ‘spaced repetition’ approach to improving piano practice efficiency (it also applies to any musical instrument). It describes some of the common approaches to practising – found among beginner students – and suggests various ways of improving their productivity.

Based on the student’s verbal feedback and observation of video recordings of students practising at home, I have noticed two distinct ‘linear’ practice strategies they often employ.

I would like to describe both of those frequently used approaches and suggest their possible strengths and weaknesses.

Both of the strategies discussed below relate to simple note-learning from the moment of first sight-reading through the piece to the fluent performance in a slow to medium tempo. This is usually achieved during the first lesson, after a one-week of practicing.

I have assumed that a student is given a composition of appropriate difficulty. Any method will most likely yield good results if the piece is too easy. If it is too complex, the learning process will be slow regardless of the selected approach.

Due to its complexity, in this article, I will not be addressing memorization – this will be covered in a series of separate blog posts.

In this strategy, the student reads through the piece from the beginning to the end many times over with very little time spent practicing smaller sections. This learning strategy is often used by absolute beginners.

In this approach, student measures their level of satisfaction and accomplishment by their ability to complete the entire task (in this case, going through the entire piece from the beginning to the end) rather than the quality of the work itself. The piece learned this way is often played very slowly throughout but lacks confidence and reliability.

The progress of more complex and challenging passages is usually slower than that of the easier ones because each section of the piece is given a similar amount of practice/reading time. Furthermore, the tempo may become unstable because the student needs to slow down in more complicated sections.

Such a continuous (or ‘linear’) way of learning can also cause mental fatigue and boredom. More frequent ‘stopping points’ would allow the student to assess their current progress and set new goals for the following sections.

In this approach, the student practices the first beat, bar or section (for example, the first phrase) many times over. Once a definite improvement to the fluency has been made, the student moves on to the next beat, bar, or section and repeats the same procedure.

Students who prefer using this method often return to the beginning of the piece to combine already learned sections together and play through all of them fluently.

The feeling of smaller chunks learned well gives the student an immediate boost of satisfaction and gratification, even if it took them a considerable amount of time to learn each section.

If a student could commit a sufficient amount of time to practice each section, the musical text is usually learned well and reliably.

Using this strategy often results in a first lesson performance characterized by the first part of the piece being played very well, the middle sounding less confident, while the ending is not learned at all. Sometimes students feel discouraged/lack of motivation because they have spent a long time studying just a few sections but feel overwhelmed by the work that still lies ahead (even though the parts they have worked on were digested well).

I hope you find the description of the two learning styles useful and consistent with your own observations. In the following section, I am going to investigate the theory behind the process of learning new skills.

The graph below (based on articles written by McLeod, S. A. in 2009 and 2017) shows a comparison between the two memory types discussed in this section:

As can be seen on the graph, short-term memory is limited in capacity and longevity. At the same time, it is lightning fast, and it can be used to store and access data instantaneously. Long-term memory – on the other hand – needs time and practice to be accessed, but it allows us to store vast amounts of information with no apparent time limitations.

I consider the ‘spaced repetition’ very important because it tells us – with a reasonable degree of precision – how often and for how long a piece of new information should be stored in the short-term memory before it can be preserved by its bigger brother.
This understanding directly impacts our ability to improve piano practice efficiency.

According to Wikipedia, ‘Spaced repetition’ is:

“a learning technique that incorporates increasing intervals of time between subsequent review of previously learned material in order to exploit the psychological spacing effect.”

This system is frequently used in vocabulary learning, but its application is becoming more frequent in practicing a musical instrument.

I have created a simple graph to summarize the principles of the ‘spaced repetition’ technique. The drawing below shows that a single repetition/rehersal of the studied material does not allow for it to be preserved in long-term memory.

The importance of ‘spacing’

If the time between repetitions is too long, our brain will start forgetting what it has already learned. During the next study session, we might have to begin the learning process all over again.

If the space between repetitions is too short, our practice becomes counter-productive. By giving our brain an insufficient amount of time to consolidate the information we have just learned, we would be forcing it to work against the natural learning process.

This does not mean that practicing something one hundred times in a single practice session will not yield results. It only suggests that the amount of effort necessary to commit a new skill to long-term memory in a short period is more significant than if the same goal was achieved by spacing the same hundred repeats across several days.

In the following section, I will focus solely on the practical application of the factors described above, aiming to speed up the learning process, and increase the efficiency of time spent at the instrument.

I would like to begin this section by outlining ‘Strategy Three’ for improving the practice efficiency. This approach is based on the ‘spaced repetition’ theory and principles of short-term and long-term memory types outlined earlier.

Strategy Three – based on principles of ‘spaced repetition.’

The ‘Strategy Three’ approach can be easily applied using the five steps delineated below:

If there are any sections of the piece of much greater complexity, I suggest a more significant number of repeats (for example, 15 or 20) or shortening of a section length (instead of a complete bar, I ask the student to divide it into beats).

If we assume that the studied piece is 5 minutes long, and repeating each section ten times would amount to 50 minutes of practice time, the sample practice schedule might look like this:

Please note that it is going to be difficult to follow this plan with a less advanced/unmotivated student. Various adjustments can be made, but the scenario outlined above incorporates the principles of ‘spaced repetition’ as well as short-term and long-term memory characteristics when applied to the instrumental practice.

The table below illustrates the differences between the three strategies for improving piano practicing efficiency discussed in this article (studied piece length: 5 minutes, number of repetitions: 100):

The file with the PDF version of the table can be found here.

For clarity, the three piano practice strategies were delineated in a slightly exaggerated manner to highlight the differences between them. They can and should be adjusted depending on the student and the repertoire.

If a student practices irregularly and skips days of practice, repeating only ten times per session might be insufficient to create a memory imprint strong enough for it to be retained until the next practice session. After a 2-3 day break, the student might have to restart the entire process again. In this case, Strategy Two, with its solid initial imprint, might be a lot more successful. Even if a student takes a 2-3 day break, some of the information from the first 100-times practice will most likely still be available in the long-term memory.

My students very often reported that during the first few days of applying Strategy Three, they felt an insufficient level of success and satisfaction from their practice. They were often frustrated by not being allowed/able to play the piece through. They also felt upset that the small sections they have studied did not improve well enough for students to a sense of accomplishment.

In this regard, Strategy One and Two have a distinct advantage. In the first case, students will enjoy the ability to perform the piece from start to finish (albeit very slowly). In the second case, they will feel that each small section they have practiced was learned very well (albeit achieved with a considerable time investment).

I feel that one of the main obstacles for students who would like to employ Strategy Three lies delayed gratification. The clear benefits of using this method can only be seen after a few days of practice.

I believe that there are still a lot of aspects of our brain we do not understand, particularly in the area of skill acquisition. I hope that through an application of ‘spaced repetition’ theory, and some of the knowledge regarding short and long-term memory types introduced in this article, the reader will be able to improve their piano practice efficiency. Today’s content was a mixture of my own teaching experience and the research findings I apply in my everyday pedagogical work.

Which category do you and your students fall into? Do you often mix those approaches? Maybe you use Strategy 1 more often when the performance deadline is approaching?

Happy practicing and teaching everyone!

PS. I purposely avoided a discussion about practicing hands separately and hands together, as well as the application of this method for memorization. Those will be addressed in future articles.